The green monkey, also known as the sabaeus monkey or the callithrix monkey, with golden-green fur and pale hands and feet. The tip of the tail is golden yellow as are the backs of the thighs and cheek whiskers. It does not have a distinguishing band of fur on the brow.

They are found in West Africa in Mauritania, Senegal, Guinea, Guinea-Bissau, Mali, Burkina Faso, Côte d’Ivoire, Ghana and the northern tip of Liberia.

Introduced populations live on Cape Verde and on the Caribbean Islands of Barbados, Saint Kitts and Nevis.

Green monkeys can inhabit both moist and dry forests alike and, like the rest of the genus, are restricted only by the water and . They are recorded in a range of habitats from riverine gallery forest to acacia savannah. Moist habitats include the edge of lowland tropical forest, riverine, gallery, rainforest, flooded forests, mangrove, swamp forest and forest.  Drier habitats include acacia dominated forest mosaics, coastal forest, dry forest, savannah and scrubland.

Green monkeys live in male-dominant groups of several males and several females. There is a social hierarchy within groups. Females tend to stay within the groups they were born (natal group) and males migrate to neighbouring groups when they reach sexual maturity (approx. 5 years). Female migration has been observed as well as solitary males, though this is not the norm. Group sizes of green monkeys vary from four to 19 individuals. A maximum group size of 174 monkeys was recorded in Senegal in 1983.

In regions of their range where there are clear wet and dry seasons, mating generally occurs during the dry season and birthing at the beginning of the wet season when resources once again become plentiful. Otherwise, mating and birthing are year round. Gestation is approximately five to six months after which a single infant is usually born.  Females reach sexual maturity at approximately three years, and  males at approximately six years. The estimated life span in the wild is 27 years. In captivity they can live up to 30.

Home range size fluctuates greatly depending on habitat, with the home ranges of some groups varying between 15 and 30 hectares and others reaching as large as 164 hectares.

Green monkeys are semi-terrestrial, moving on four limbs both on the gound and through the trees. They are opportunustic omnivores, i.e. they are generalists and will adapt to changes in the environment, eating whatever is available. They will eat fruits,  seeds, leaves, flowers, gum, bark, lichen, soil, insect larvae, insects, birds (plucked before being eaten), bird eggs, small mammals. In mangroves in Senegal they eat fiddler crabs. Acacia trees are central to their diet. They will also eat crops in cultivated land and accept handouts from tourists.

Predators include raptors, snakes and humans. 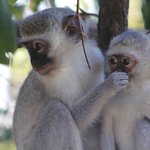 Beautiful Satchmo in the JALamango samango troop. 2nd pic he is sitting next to female Zea, Mango is also never far behind them. We only have 3 samango monkeys here and we are so happy for this little guy to join .… https://www.instagram.com/p/CCmMnaWBb4b/?igshid=vn10o7g46xb6