Grivets are present in Sudan, Eritrea, Djibouti and Ethiopia.

Grivet monkeys are normally found close to rivers. They exploit the majority of forest, savannah and mosaic habitats. They seem only to be restricted by the availability  of water and sleeping trees, utilizing acacia-dominated savannah as well as dense riverine forests. This species occurs in moist tropical, riverine, gallery, evergreen forest habitats, as well as deciduous,  dry forest, savannah, acacia forest, forest mosaic. They also utilize secondary growth and edge forests, as well as mangrove, swamp and thorn scrub forests. In the highlands they have also been recorded in eucalyptus forest. Being extremely adaptable they can live in human-dominated rural and urban environments. Crop-raiding is  reported throughout their range.

Groups of grivets range from three to 22 individuals, averaging at about a dozen. Groups are made up of males and females, with males usually outnumbered by females. Social groups work within a social hierarchy. Males migrate to neighbouring groups when sexual maturity is reached while females stay in the groups in whoch they were born (natal group) groups.

Studies of this species are not abundant and home range and day range for the species are not reported.
Grivet monkeys are mainkly terrrestrial, moving on four limbs both on the gound and through the trees. They are opportunustic omnivores, eating fruit, seeds, leaves, flowers, gum, bark, grass and insects. Though the consumptoin of animal prey is not recorded, the diet of the grivet is presumed to be similar to the much-studied pygerythrus. Acacia trees are a central part of the Chlorocebus diet.  Grivets raid crops and are therefore considered a pest in a lot of their range. They will also accept handouts from tourists.

Today is Little Gs day🐵
Little G is still in Disneyland getting more confident day by day. We hope this little handsome guy will be ready to move to an introcage and meet a foster mum soon!
#thevervetforest #vervetbaby #vervetmonkey https://ift.tt/2RwExkj 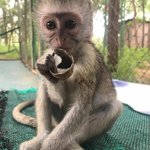 SATCHMO😍
Our samango baby is doing so well! He is becoming super independent and is now in his own introcage with a volunteer member to help monitor and care for his baby needs.
He loves milk and is becoming a fan of broccoli!
#vervetforest #samango https://ift.tt/3aQSXDF 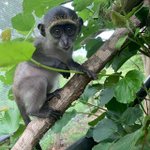 For the first time since his arrival, Rox is sleeping soundly. In this photo you can see not only the cast on his right leg, but also the stitches where the pins were placed to reconstruct his left leg. He also started to readily drink milk today, so in … https://ift.tt/37sRz7N 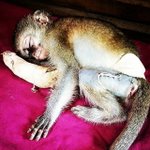 Rox is still trying to process all that has happened to him in the last 2 days, but the progress he has made is astounding! He is able to move around better and is slowly exploring his surroundings. He is eating a lot (His favourites so far are apples an… https://ift.tt/2NWK1T7 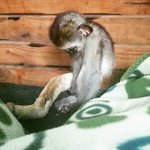